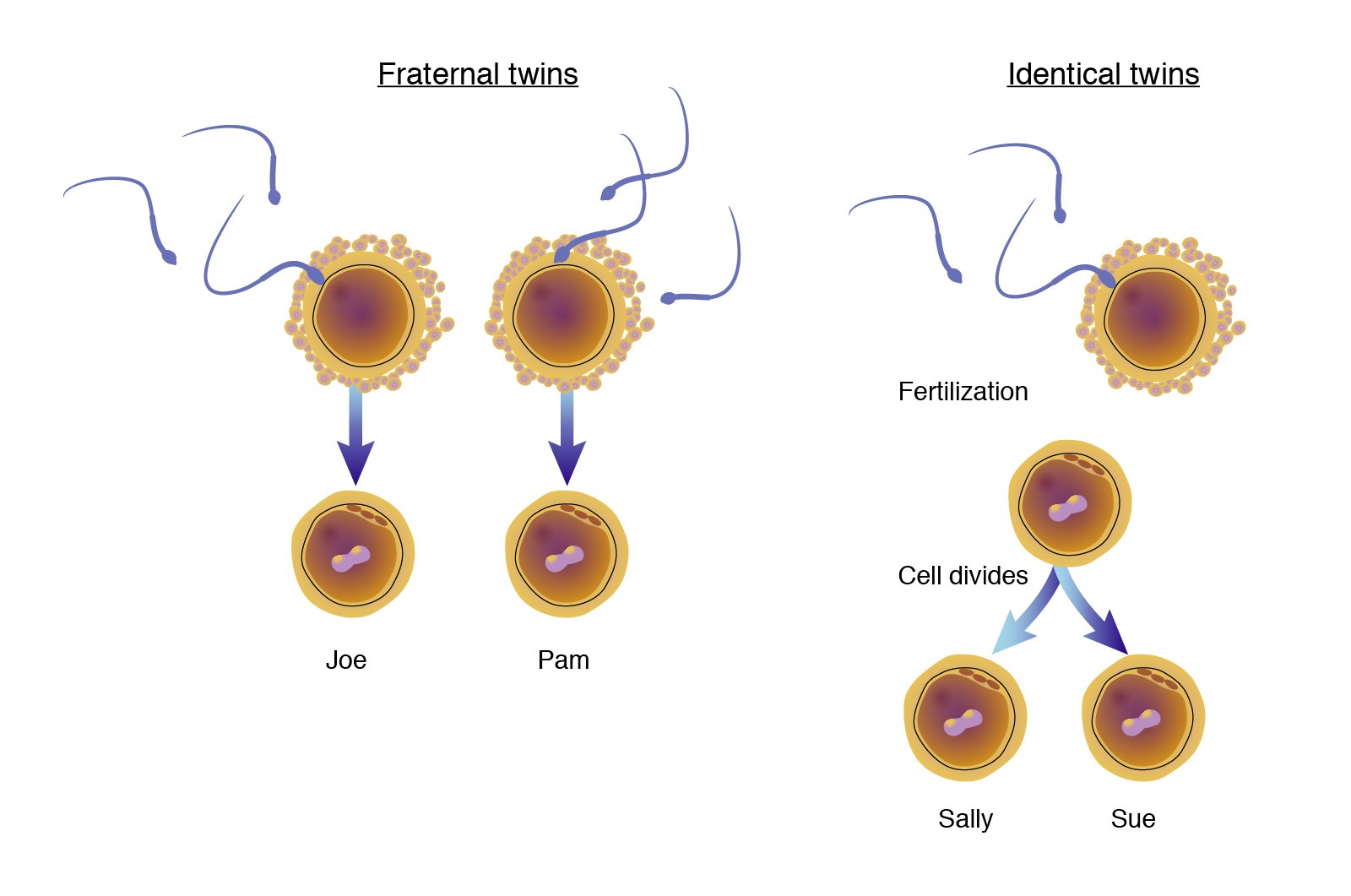 Identical twins are also known as monozygotic twins, and result from the fertilization of a single egg that splits in two. Identical twins share all of their genes and are always of the same sex.

In contrast, fraternal, or dizygotic, twins result from the fertilization of two separate eggs during the same pregnancy. They share half of their genes, just like any other siblings. Fraternal twins can be of the same or different sexes.

Singleton is the birth of only one child during a single delivery.

Triplets can be either fraternal, identical, or a combination of both. The most common are strictly fraternal triplets, which come from a polyzygotic pregnancy of three eggs. Less common are triplets from a dizygotic pregnancy, where one zygote divides into two identical fetuses, and the other doesn’t.

There are more different kinds of twins – see below. Normally, except the first two kinds, others are known to be quite rare to occur. All these twins, apart from similar faces have some varied characteristics.

These twins will often have “mirror images” of their features, such as hair whorls that run clockwise in one and counter clockwise in the other, a birthmark on the right shoulder of one and the left shoulder of the other, etc. There is no specific test for determining if twins are mirror-image. The determination is made by observation only.

This occurs if two separate sperms fertilize two separate eggs which then fuse, producing individuals with different sets of chromosomes. Some have been identified to have more than one distinct red blood cell type and individuals who are both XX and XY (the sex chromosomes – XX being female and XY being male.) It is very rare, and less than 25 cases have been identified as yet.

Superfetation is the occurrence of another pregnancy during an ongoing pregnancy. It happens when there is fertilization of an ovule by a sperm cell while a conceptus is already present in the womb.

Twins can have different fathers. One well known case was described in 1810 in the United States. A woman had both a white and a black lover, and she became pregnant and gave birth to twins, one white and the other black. Each twin had a different father. This is called superfecundation.

Twins that are male and female or have different blood types can easily be determined as fraternal. Fraternal twins can share many similarities in appearance just like any brother or sister of the same family.

Identical twins start out as genetically identical as they have the same genes. They are formed by a fertilized egg dividing into two separate individuals. They are always of the same sex.